The little paradise in the tramuntana mountains – Deià 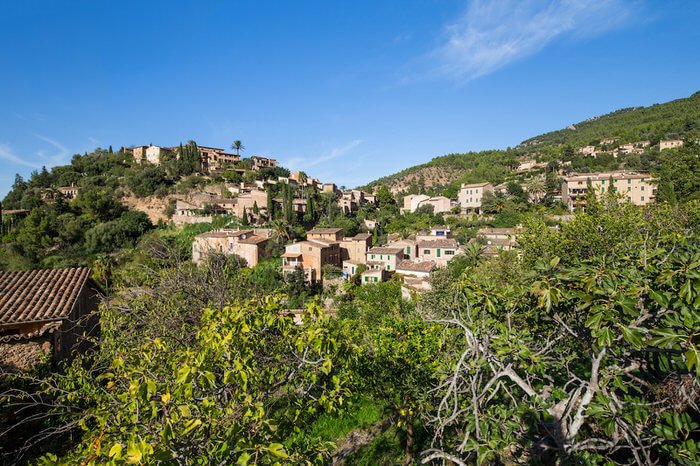 The little paradise in the tramuntana mountains – Deià

The small coastal village of Deià, on the northwest coast of Mallorca, is one of the prettiest villages in Mallorca. Perched in a ravine at the foot of the Teix mountain, with views out to the Mediterranean below, Deià has long been a magnet for famous artists, writers and other creative people – most notably the writer Robert Graves. As one of the highest populated zones of the Serra de Tramuntana, Deià is part of a landscape awarded World Heritage Site status for the way in which nature, culture and traditions triumphantly merge. Much of the Deià’s appeal lies in its laid-back vibe and blissful surroundings, making a stay here highly conducive to rest and relaxation amidst some very impressive views of the blue sea and stunning mountains.
What to do in Deiá?
Visitors tend to opt for pleasurable eating and drinking experiences, with some enjoyable walks or hikes, and trips to Deià ’s small but very pretty cala. The road through Deià is the main coast road and can be very busy, and parking in the village can be difficult during the summer, when the small public car park is often full. To the right of this road, the 5* Hotel Residencia is a haven of peace. Formerly owned by Sir Richard Branson, over the years it has attracted many famous guests: Princess Diana holidayed here, and singer Robbie Williams and his girlfriend enjoyed a pre-wedding stay in the hotel’s tranquil setting. There are a few interesting small boutiques, galleries and shops in the village, and plenty of places to eat and drink – including the Michelin-starred Es Racó d’Es Teix. It’s worth taking time to stroll around, admiring the sympathetically restored old stone houses nestling in narrow alleys. Walk up to the church graveyard and you’ll find the simple headstone marking Robert Graves’ final resting place, appropriately set in the village he loved. Deia’s rich landscapes make it a rewarding place to go walking. Ranging from easy to more challenging, well-established hiking routes include Miramar monastery, and Sa Foradada, a picturesque peninsula with a spectacular lookout point. One of a handful of Michelin-starred restaurants on the island, Es Raco d’es Teix promises a very special dining experience in a romantic setting. Situated up a steep hill from the main street, Es Raco offers high-end Mallorcan cuisine created with care and ingenuity by German chef Josef Sauerschell. Just a stone’s throw away on the central road through the village, another German chef is working his culinary magic. Sebastian Pasch of much-loved restaurant Sebastian has established a firm reputation for mouthwatering Mediterranean dishes infused with a dash of Asian flavour. A candlelit meal in this former stable dining room is one of the highlights of a trip to Deià for a large loyal clientele.
Buying a property in Deiá
If you wish to purchase a property in Deià you’ll have some illustrious neighbours, including Sir Andrew Lloyd Webber, Michael Douglas or PR guru Lynne Franks. Property prices are high in this popular location. Around half of the village’s 850-strong population are expats, amongst them the descendants of the bohemian group of artists and writers who first discovered Deià for themselves. British buyers dominated the market in 2014 with an average sale value of approx. 1.27 Mio €. Deià’s great views come not without their price, though, with winter temperatures feeling much cooler in the mountains than elsewhere on the island, and reports of snow in the Serra not uncommon. Indeed, in past times, snow falling here was preserved in ice blocks and used for medicinal purposes throughout the year. Read more information about Deiá: www.abc-mallorca.com